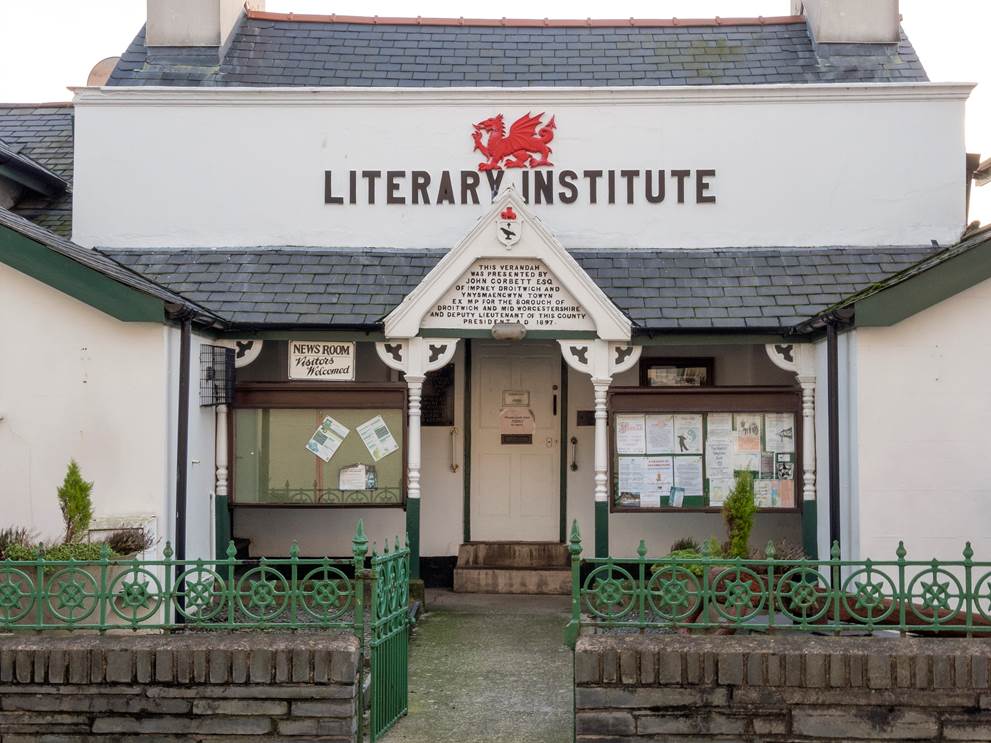 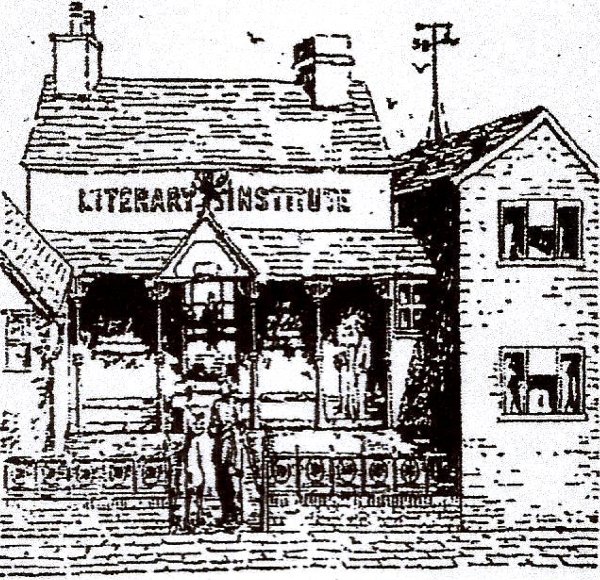 Much of the information below is taken from “Aberdovey Literary Institute 1882–1982” by the late Henry Kenneth Birch.

The Literary Institute, a registered charity, is one of the few buildings on the river / sea side of Aberdyfi and has had a long and chequered history.

It was founded in late 1882 and was formerly an old bath house and a meeting place of the Plymouth Brethren. Initially the rent of the building was £10 per annum, a not inconsiderable sum then and meant that charges for those wishing to be members had to be an appropriate way of raising this figure. The first subscription fees were fixed at:- Honorary Membership 10/6d per annum, Ordinary Membership 1/- per annum and for those under 21 years of age the fee was 6d per annum. However, these were quickly revised and in January 1883 Ordinary Members were paying 4/- per annum and those under 21 but over 14 years of age paid 2/-. Visitors could have temporary membership for 2/6d. Membership of the Institute obviously proved popular as a list of Ordinary Members for 1905 shows a membership of over 60 persons each paying 5/- per annum.

Opening hours were shown as 10 a.m. until 10 p.m. Sundays excepted with smoking only allowed from 6 p.m.

During World War I the Institute was used by awide variety of organisations – Belgian refugees in the area were allowed free use of the rooms, the Lower Committee room was used for the Emergency Corps and by October 1915 the Institute was used as a centre for those wishing to ‘join up’. Many fund raising efforts were organised so that parcels and sometimes money could be sent to those on active service. When peace finally came with the signing of the Peace Treaty at Versailles in 1919 it proved to be a new start for the Institute. A number of applications were received to join the Institute with four under age boys all wishing to play billiards. This resulted in the Committee buying its first billiard table costing £65 from the Dovey hotel.

In 1922 the freehold of the Institute was purchased together with freeholds for 1, 2 and 3 Bath Place. This was only possible due to the generosity of Mr A Tomlins who purchased the properties for £360 on behalf of the Institute and then gave the Deeds to the Trustees as a gift.

In 1933 the Institute marked its Golden Jubilee by setting aside 20th July as day of celebration. Tea was provided for all schoolchildren who also received a commemorative mug or medal and in the evening entertainment in the form of the Concert Party took place – fee being £10 guineas!

Within days of the outbreak of World War II a letter was received asking permission to use the Institute on five mornings a week as a school. Permission was granted and this arrangement continued until 1943 . An attempt was made to continue after this but the new arrangement was to only last for one term. However in January 1945 a request was received to run a school for an indefinite period and this was granted on the condition that 15/- per week rent was paid together with the responsibility for heating the room. During the war years troops in the area were admitted to the Institute at a special rate of 1/- per quarter.

In 1948 the Institute received the gift from the Masters and Fellows of Emmanuel College, Cambridge of a billiard table belonging to the late Mr C H Alcock. In the same year the Committee received a solicitor's letter advising that a Miss E Roberts, Gwynfechan, Arthog had included a clause in her will:- “To the Aberdovey Literary Institute my freehold dwelling houses and premises known as No's 33, 34 and 35 Terrace Road Aberdovey, aforesaid in trust to apply the annual income thereof for the benefit of the said Institute such gift to be known as the Elizabeth Roberts benefaction”. After much discussion by the Committee the properties were sold to the existing tenants for £800 and this sum was invested by the Trustees on behalf of the Institute.

By the 1950’s membership was declining – some said it was due to the increase in the membership fee from 5/- to 7/6d per annum – and consideration was given to the formation of a Literary and Debating Society. This culminated in a ‘Drama Week’ and through tremendous effort on the part of a sub-committee the venture was a huge success.

The Institute had experienced problems for some time trying to attract a suitable applicant to fill the post of caretaker which had, by and large, been a residential post. Finally, an Aberdyfi resident was appointed to the fill the post in a non-residential capacity which then meant that the accommodation was available to be rented out.

The future of this almost unique and iconic building is encouraging. It is one of only a few Reading Rooms which remain open in the U.K. and the village of Aberdyfi should be justly proud of this achievement. The snooker / billiards section is extremely popular with league matches being played throughout the winter months. Membership is slightly declining but it is hoped that new members will be encouraged to come forward, subscription rates remaining at £15 per annum.

The Reading Room is open every day 9 a.m. until 4.30 p.m. except Sundays (when the whole of the Institute is closed) and the public are invited to enjoy the peace and tranquillity of this room whilst reading the selection of newspapers available in the Reading Room – daily, local, national, weekly, monthly in both Welsh and English. Be sure to take advantage of the spectacular view too! Free Wi-Fi connection is also available here.

If you would like to become a member of the Literary Institute please contact the Secretary / Treasurer, Avril Richards 01654-711200 (aandmrichards@btinternet.com).

Rooms at the Institute may be booked for Coffee Mornings, Meetings, etc. by contacting the Secretary (details as above).

For the latest news and events, see our page on aberdyfi-council.wales.